Lots of Miscellaneous including jewelry, games, garments, instruments and so much more.

We are the “home” for unique, one-of-a-kind art pieces from Asia, the Oceanic Islands, parts of Africa and South/Central America . . .  and many parts in between.

Whether you are seeking an investment-quality 15th Century artifact from the Majapahit Empire for yourself or an unforgettable porcelain gift from China for someone else, EsotericStuff.com has what you are looking for with  selection,  reasonable prices and superb customer service.

Please browse frequently.  Register for advance notices of new “stuff” that has arrived.

Contact me anytime with your questions or your purchase requirements.  I am located in Oregon USA.

NOTE to the Serious Collector (Art Collector, Gallery Owner, Dealer or Academic): click here for items unique to your requirements. 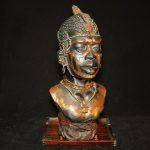 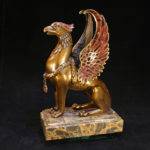 Whoa….   This is certainly one of Maitland Smith’s most creative and sophisticated mythological and decorative creatures.  If the definition of a griffin is true to form, then this piece is the epitome of courage and boldness… with a massive helping of beauty and elegance.   This statue features a very detailed, brulee-finished […] 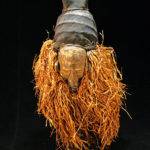 After a long history of forced migration and union with other groups, the Yaka have been an independent society since the 19th century.  Living in the northern Congo, the Yaka are primarily hunters, although they also practice small scale farming.  The Yaka has a tight-knit control & social system:  a chief, second in command who […] 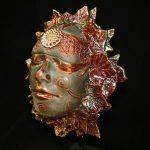 Raku is a pottery technique that has its origins in 16th century Japan. It might have been developed by Korean potters (under Japanese rule). The raku technique, like other pottery techniques such as salt glazing and pit firing, primarily revolves around it’s firing process. Traditional raku and our Western version are similar in […] 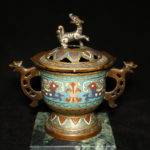 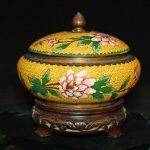 Cloisonne, cloisonné, cloisonné . . .  how simply gorgeous.  The detail – with copper wire forming the partitions – is just stunning.  And don’t get me started on the enamel work!   This piece is from the early 1950s and is in perfect condition.  This is an excellent example of Chinese craftsmanship.   […] 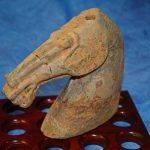 I bought this from a very reputable antiquities dealer in London England with no discrete documentation or TL dating.  However, recently I did additional research on the clay, coloring and the Han features. The size is right, the (reesotericstuff.coming) coloring is right and the style is typical of a facial expressions used on these […] 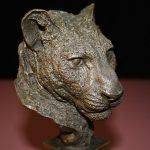 This is a recent casting of a Cheetah face on a marble pedestal, signed by P.J. Mene.  The lost wax method was used and it is detailed and gorgeous.  There is a seal from the European Bronze Society affixed.  A great addition to your collection of African artifacts. 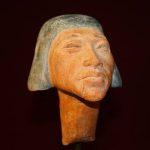 Amarna is an Egyptian archaeological site. About 1300 BC, Pharaoh Akhenaten built a capital city on that site.  It is about 200 miles south of Cairo. This piece is a limestone / quartzite composition replica of the original harpist head currently residing in the Louvre (in wood).  This sculpture captures the essence of Pharaoh Aktenaten’s […] 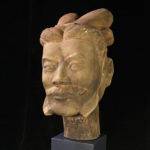 In the early spring of 1974, workers sinking a well in Xiyang Village suddenly discovered an ancient bronze weapon and pieces of broken terracotta armored warriors.  That was the start.  Within two years, three pits were found and within 8,000 terracotta warriors, horses and more than 100 chariots.   But that was just the […]